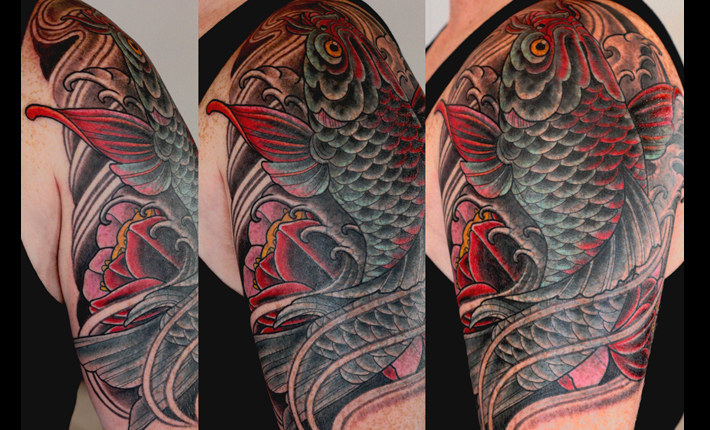 Terry Ribera did a cover up on a long time friend that drove down from Sacramento to San Diego get this tattoo done over two days.  The design was drawn up on the spot for a cover up as Terry and Neal agreed that this would be the best way to prepare for the design given the distance between them and the nature of the cover up.  Neal wanted to cover up his old tattoo with a much larger design.  With this tattoo the goal was to create something that would distract the viewers eyes from any lingering marks leftover from the older design without compromising the layout of the new tattoo.  The colors choices where limited as the tattoo is a cover up, they decided to go for a Steel Blue and Battleship grey color as the base of the design.  The background was done in your standard Japanese black and grey, with some touches of opaque grey to help conceal the older tattoo.  Accents of Red and Teal where put into the fish to help the image less of a flat appearance.  The tattoo covered quite well,  and Neal will be back for a return trip to Remington Tattoo in San Diego to visit in the next coming months.  If you would like to see more work from Terry Ribera, please check out his websites: www.terryribera.com | www.remingtontattoo.com