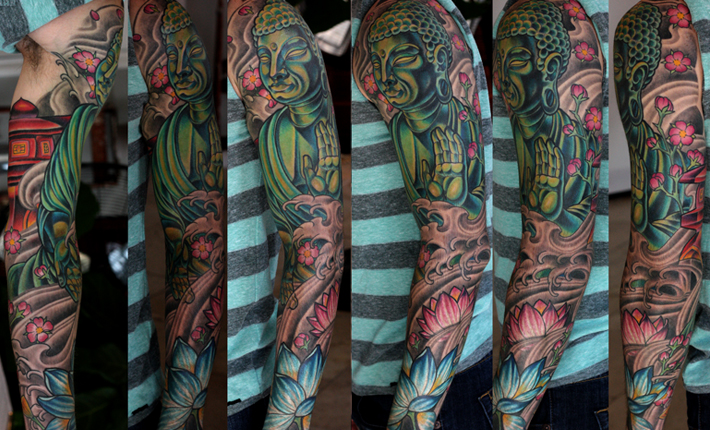 This was another really cool tattoo done by Terry Ribera at San Diego’s best little tattoo shop, Remington Tattoo.  Remington Tattoo is a custom based tattoo Shop owned by Terry Ribera.  This tattoo was one of the first tattoos started and completed at the new shop.  Terry Ribera has been tattooing here in San Diego for nearly 11 years and opened the doors to Remington Tattoo In July 2011.  The theme of the tattoo is based on a Buddha with other elements that can be found in Japanese tea Gardens.  The layout of the tattoo is bold and simple, which is Terry’s ideal layout for a tattoo.  Terry pushes clients to collect their tattoos in a way that will hold up well and age nicely over time.  This tattoo is also a cover up of an older tattoo.  There was a leo symbol that is no longer visible as it was successfully covered by the new tattoo.