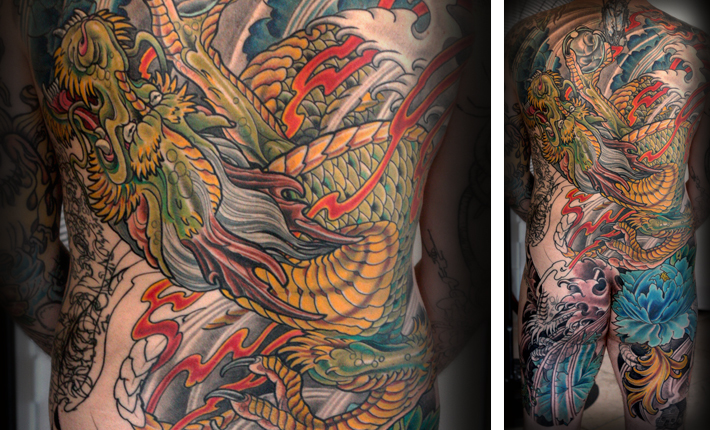 This tattoo has been a huge honor for Terry to tattoo his long time Friend Dan Pryor a local San Diego tattoo artist at Seven Seas tattoo.  Terry Ribera originally started the tattoo while working at Avalon Tattoo II, but has since completed nearly half the work while at his new shop in North Park.  Dan and Terry have known each other for nearly 7 years and worked together at Seven Seas at one point.  Dan had explained to Terry Nearly a year ago that he wanted his back to be tattooed in a large Japanese theme of a dragon, water, flowers and some fire.  Terry was eager to take on the project as it’s challenge he has not had the chance to tackle and the fact that it was on a fellow tattooer made this project even more exciting.  There was some cover up issues with design and some older tattoos to work around, but so far the tattoo is shaping up well.  We will have to thank Dan for Sitting like a rock and pushing through a lot of sensitive areas while getting his tattoo worked on.  After many of the sessions Dan had to return to work the next day and we are sure that in itself was no easy task.